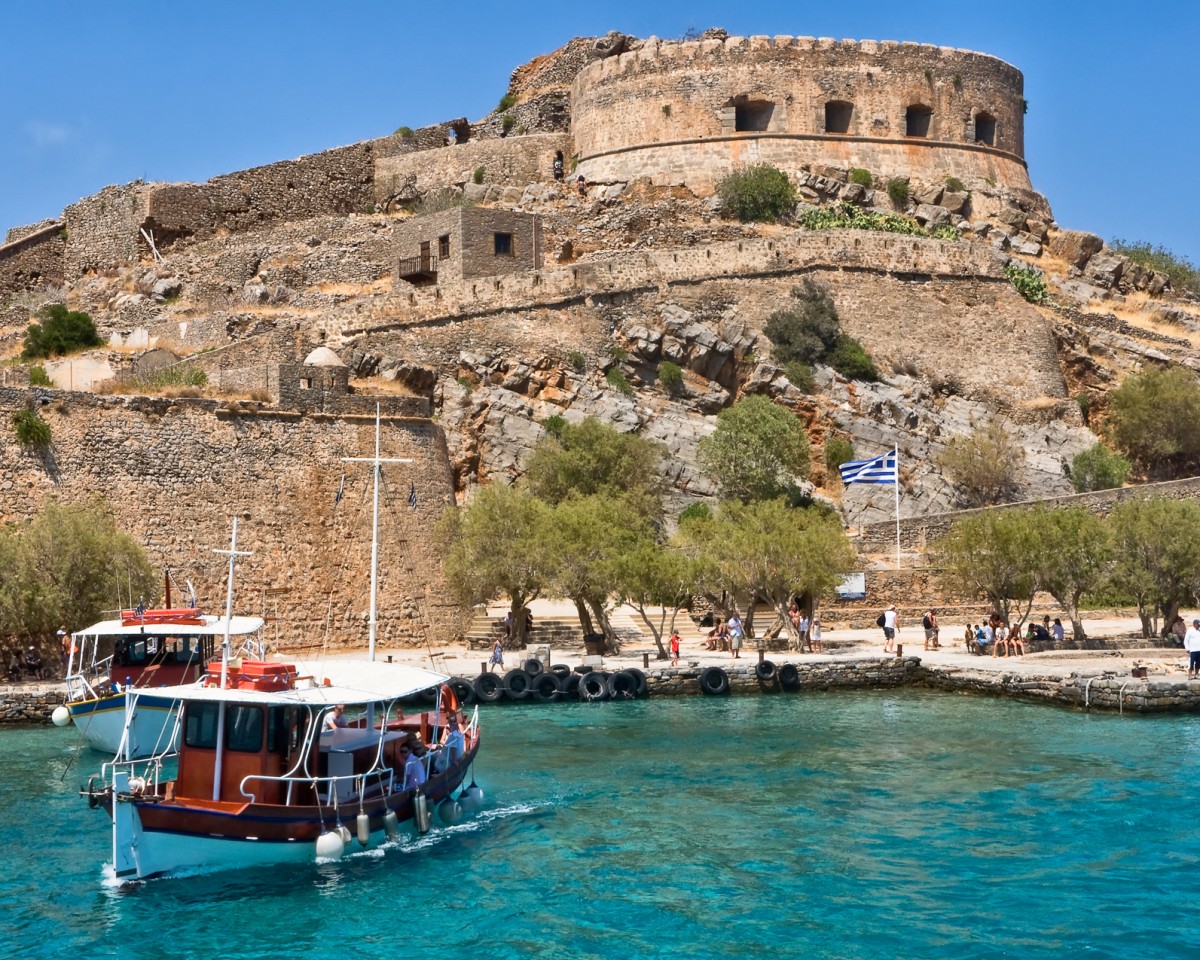 The key position of the islet of Spinalonga for the control and protection of the port of Elounda could not but mark Spinalonga with a turbulent history full of hard battles and a lot of human pain.

Spinalonga is a small island which closes from the north the bay of Elounda in the municipality of Agios Nikolaos in the prefecture of Lassithi, Crete. It was fortified excellently by the Venetians both in terms of construction and architecture and in terms of aesthetics of the whole landscape that still retains its beauty.

Because of its position the island was fortified from its earliest years in order to protect the entranceway of the port of Ancient Olous . ( Olous was a city of ancient Crete; now sunken, it was situated at the present day town of Elounda, Crete, Greece ).

It is said that Kolokytha was united with Spinalonga (hence the same name), but in 1526 the Venetians opened a canal resulting in the creation of this small island.

This information comes from the Venetian cartographer Vincenzo Coronelli and we quote it with every reservation for its accuracy.

However, the island is only 170 meters away from Kolokytha and the waters are shallow, so it is possible that the Venetians actually proceeded with this project in order to create an impregnable island - fortress.

In 1578 the Venetians charged the engineer Genese Bressani to plan the island's fortifications. He created blockhouses at the highest points of the northern and southern side of the island, as well as a fortification ring along the coast that closed out any hostile disembarkation..

The Venetian merchants immediately recognised the value of the natural harbour of Elounda and naturally exploited it. In the shallow, salty waters of the bay they built salt-works, a particularly while continuing to export local agricultural goods. Salt was harvested from salt pans around the island.

In 1715, the Ottoman Turks captured Spinalonga taking over the last remaining Venetian fortress and removing the last trace of Venetian military presence from the island of Crete.

At the end of the Ottoman occupation the island, together with the fort at Ierapetra, was the refuge of many Ottoman families that feared Christian reprisals.[4] After the revolution of 1866 other Ottoman families came to the island from all the region of Mirabello

Spinalonga was one of the last active leper colonies in Europe. The island was subsequently used as a leper colony from 1903 to 1957. The last inhabitant, a priest, did not leave the island till 1962, in order to maintain the Greek Orthodox tradition of commemorating a buried person 40 days, 6 months, 1 year, 3 years, and 5 years after their death.

Spinalonga has appeared in novels, television series, and a short film.  In the 1977 British television series “Who Pays the Ferryman?” and Werner Herzog's experimental short film “ Last Words ”. It is the setting of Ali Smith's short story “ The Touching of Wood ” (in Free Love and Other Stories, 1995). It is also the setting for the 2005 novel “ The Island ” by Victoria Hislop, the story of a family's ties to the leper colony; the book was adapted for television in the television series “ To Nisi ”.

Today, the uninhabited island is a popular tourist attraction in Crete. In addition to the abandoned leper colony and the fortress, Spinalonga is known for its small pebble beaches and shallow waters.